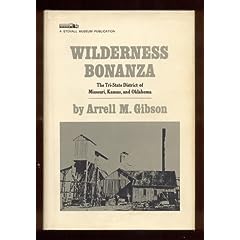 Wilderness Bonanza is a popularization of Arrell Gibson’s PhD dissertation supplemented by thirty years of subsequent research. His organization of material is chronological within thematic categories, however, the absence of plot would seem to eliminate the possibility of calling it a narrative history, as is common in many popularizations. The George A. Spiva Library on the campus of Missouri Southern State University, which houses Gibson’s professional papers in its Special Collections area, describes Gibson as a “western historian.” This title would seem to be in accord with what Yi-Fu Tuan might call a historical-geographic myth which features frontier.

Not only does Gibson stand in direct linage of those advocating a teleological philosophy of history, he also seems to have been strongly influenced by adherents of a western theory of progress (like Frederick Jackson Turner). This work advocates progress through gradual, unilinear, cumulative improvement; Gibson discusses the stages through which camps/towns progress, he divides his discussion of mining methods into three distinct stages, he uses periodization to describe labor relations in the Tri-State District. A theory of material progress seems apparent in his repeated use of the phrase “a new era.” Further, he employs the terms “evolve” and “evolution.” Gibson seems to fit the description which Gertrude Himmelfarb used of Nisbet, “Thus, progress is gradual and cumulative, material and moral, reflected in improved conditions and prospects for an ever-increasing number of people.”

I personally appreciate a historical approach that is teleological. Further, I appreciate the depth and breadth of Gibson’s knowledge. However, on page 250 of Wilderness Bonanza Gibson writes, “It is amazing that private as well as governmental facilities produced such an abundance of research and published literature on improving mining practices and yet neglected for so long the district’s human element and its improvement.” It seems to me that Gibson is guilty of the same approach which he is faulting; absence of the human element.

Where are the people in this work? Banking hours are discussed but very little is said of the people who banked. Job positions and salaries are explicated but what is said of the people who received wages? In fact, it almost appears that in places Gibson intentionally left out information which would enliven his work and bring out the human element. For instance, in his discussion of the western movement of mining from Southeastern Missouri to Southwestern Missouri he notes that Moses Austin received a land grant from the Spanish government. It would have tied his discussion to larger events, enlivened it, and in no manner sidetracked it if he would have mentioned that this was the same Moses Austin who later received permission from the Spanish government to take 300 settlers into Texas but his demise resulted in his son Stephen taking this action.

Gibson has a chapter entitled “Tri-State Social Conditions”, but the title seems misapplied as the chapter focuses almost entirely on health issues and does not even present a significant discussion of the social ramification of the health issues which he raises. He has a chapter entitled “Tri-State Society,” but gives only a paragraph to discussions of education, religious life, intellectual life, etc. He is thorough in his discussion of geology, technology, and metallurgy but his people are discussed only when essential to further the discussion of process and progress. He seems to display an approach which Michael Adas, Professor of History at Rutgers University, would call “machines as the measure of men.”

Jacques Barzun might claim that this work fails as a historical work in that history requires a humanistic approach which is absent in Gibson’s work. Nevertheless, those with an interest in cultural geography, mining, or local history of the Tri-State Mining District will find the book to be beneficial and interesting.