When we travel with our children I feel like one of the castaways of Gilligan’s Island. The crew and passengers on the Minnow set out for a three-hour cruise and look how long they ended up on the island. It is true that it couldn’t have been toooooo long because Ginger’s wardrobe never showed any wear and tear, but it was long enough for them to experience a ship wreck, to be captured by a Japanese sailor who did not realize WWII was over, to grow a garden of radioactive vegetables, for Gilligan to be turned into a chimp by way of a voodoo spell, and to share adventures with cannibals, a jungle boy living on the island, a big-game hunter looking for new prey, Russian Cosmonauts, a foreign spy who looked just like Gilligan, long-lost aviator “Wrong-Way Feldman”, and a rock-and-roll group (surely you hadn’t forgotten Bingo, Bango, Bongo, and Irving).

When my household sets out to visit my family in Northeastern Oklahoma, we have a six hour trip ahead of us. However, we never make it in six hours. . . at least not anymore. When it was just Susan and I, we could make it in six hours even with bathroom stops along the way. Then, Parker came along, it became a seven hour trip. Then, Tessa joined our crew, and it became an eight hour trip. Daniel became part of the entourage and it then took us nine hours. And, I kid you not (pun intended), now that we have Gabriel Paige it takes us ten hours, each way, to make the trip. How in the world can each child add an extra hour to our journey? Well, I can’t answer that except to mention, “I’m hungry, I’m thirsty, I’ve got to go to the bathroom, I’m carsick, I think I am going to vomit, Parker is teasing me, Tessa spilled her juice, I threw up, Daniel has a stinky diaper, Gabriel wants a bottle, . . .”

Well, somehow the castaways managed to survive all of those things mentioned above plus a hurricane, an Air Force missile test, the Skipper’s amnesia and his sleepwalking, a disease that made them age rapidly, a gorilla armed with an abandoned WWII arsenal, a lion that washed ashore, a volcano, a ghost, and a mad scientist who trapped them in each others bodies using a mind-swapping machine. So, I have hope that I too can survive traveling with my four children. 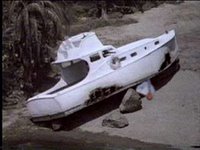 Just sit right back and you’ll hear a tale,
a tale of a fateful trip.
That started from this tropic port,
aboard this tiny ship.
The mate was a mighty sailin’ man,
the skipper brave and sure.
Five passengers set sail that day,
for a three hour tour, a three hour tour…
The weather started getting rough,
the tiny ship was tossed.
If not for the courage of the fearless crew,
the Minnow would be lost;
the Minnow would be lost.
The ship took ground on the shore of this uncharted desert isle,
with Gilligan,
the Skipper too,
the Millionaire,
and his Wife,
the Movie Star,
the Professor and Mary Ann,
here on Gilligan’s Isle.

And after the adventure we would hear . . .

So this is the tale of our castaways,
they’re here for a long, long time.
They’ll have to make the best of things,
it’s an uphill climb.
The first mate and his skipper too,
will do their very best,
to make the others comfortable,in the tropic island nest.
No phones, no lights, no motor cars,
not a single luxury.
Like Robinson Crusoe,
it’s primitive as can be.
So join us here each week my friend,
you’re sure to get a smile.
From seven stranded Castaways,
Here on Gilligan’s Isle.