The churches I grew up in took Hebrews 10:25 seriously. I think they thought that if they kept us in church all the time we wouldn’t have time to sin. But instead, as Grady Nutt used to say, I learned to sin in church, . . . from experts.

The teens in our church sat on the back two or three pews on the starboard side. The guys sat on the very back pew, and . . . well, to be honest it is a good thing that Homeland Security had not yet been established because we were terrorists (may God forgive me).

Like most baptist churches of that era, we would stand for several songs, then there would be a prayer, and then all would sit. Well, during the prayer we would stack song books in the seat in front of us so that when the girls sat down they would sit on the song books and jump back up. (Yes, we were desperate for female attention.)

There was a normal Sunday morning routine. The girls on the next to the back pew would inevitably dig out some gum or candy and share with the guys on the back pew. It was always the girls who brought it to share, but that was only right seeing as how they had purses to carry it in.

On one occasion Craig Olds and I had been to Joplin the previous evening and while at the mall we had purchased some candy to share with our friends at church. However, our objective was not entirely altruistic. The candy that we purchased was a very special kind of candy. It came in a shiny golden wrapper. When it was opened it released a stimulating lemon aroma. Ahhh, very nice.

Well, . . . maybe not so nice. For, you see, after having worked through the outer lemon shell one arrived at a pungent, sickening garlic center.

We passed out the candy just prior to the invocation and sat back to await the results. To our surprise nothing happened for several minutes. That lemony outer shell was evidently quite savory. And then, … there was just the slightest waft of garlic in the air. Craig and I looked at each other and tried to keep from laughing (remember, he was the evil one, I was just under his influence). The smell continued to increase and people began to look around at each other with an uneasy questioning look. We were stunned when our victims began to hold their noses and blame each other for the indiscretion. No one seemed to realize that they themselves were at least partially the source for the foul odor! Eventually, everyone realized what had happened and there was a mass exodus as our victims sought relief. However, it is interesting that each and every one of our victims pointed an accusing finger at others before realizing that they were part of the problem.

That seems to be the way it is with sin. It is so much easier to notice the speck in our brother’s eye.

Now, if you will excuse me, I have a redwood forest in my eye with which I must deal. 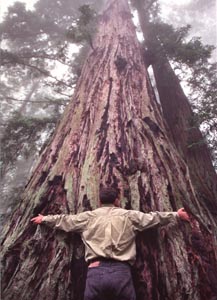