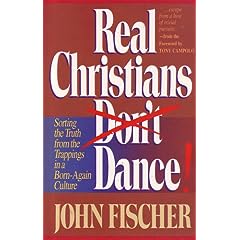 I must be getting old, for I have come to the point that I enjoy re-reading books more than I do reading them for the first time. I just finished re-reading a book that I first read nearly two decades ago. I purchased this hardback copy of John Fischer’s Real Christians Don’t Dance from the Berean Bookstore in Atlanta back in 1989 for $10.95.

Fischer was emergent before Emergent was cool. Many of the convictions found in this book are identical to those being bandied about by the angry, young, goatee-wearing emergents of today (I only said it that way to needle my friend Paul). However, there is also a striking difference. Fischer isn’t sullen or splenetic. The dustcover is accurate in its description when it says;

Free from sarcasm and ridicule, Real Christians Don’t Dance challenges the evangelical Church to identify true Christianity from the sub-culture that has developed around it, to discover what is real obedience and love. Readers may discover in their lives more tradition than truth, more Christianity than Christ, more fundamentalism than faith, more law than love.

I need to note that the above statement not only applies to Fischer, but also describes what is best in the Emerging Church Movement. However, it does seem that there are all too many within the Emergent Movement that are not “free from sarcasm and ridicule.” There is a reason why Emergers have been labeled by some as “Oozers with Uzis.” In fact, many are down right ornery in their attempt to throw off the worn out garb of the Christian sub-culture and replace it with a cooler, hipper Christian sub-culture.

Of course, many of those criticizing the Emerging Church Movement have also donned their halos just to drop them in the mud. Many of the arguments against the ECM are nothing more than straw-man arguments and some are quite vicious in their execution.

Despite what John Paul Young might think, it does not seem that Love Is In The Air.

The Emerging Church Movement is not new, it has simply been branded more effectively in an era in which branding is the sine quo non of entrepreneurial Christianity. Thus, there is much the ECM can learn from Christianity’s cultured despisers of the past. No, I am not talking about Schleiermacher, I am speaking of Francis Schaeffer.

Like the Emerging Church Movement, Francis Schaeffer challenged Evangelicals to be free from all unnecessary encumbrances. However, his call was a call to something. He called Christians to abide in Christ’s word, to be true disciples of Christ, to know “the truth, and the truth will set you free” (John 8:31-32). However, I am afraid that much of the Emerging Church Movement has been influenced by a postmodern epistemology such that it is merely a call away from something to a freedom from encumbrances that leaves a dangerous vacuum.

43 When the unclean spirit has gone from the person, it passes through waterless places seeking relief and does not find it.

44 Then it says: I will return to my house from which I came; and having come he finds it empty, swept clean and put in order.

45 Then it goes and brings with it seven other spirits more evil than itself, and having entered they live there; and the last things of that person become worse than the first. So it will be also for this wicked generation.

I think it is time for a new generation to discover and read Francis Schaeffer. I tell you what, If you read Schaeffer and do not benefit from it, I’ll buy you a Coke. See, you can’t lose.

Wow, I didn’t have any intention of saying any of the above when I began writing this review of Fischer’s book…, and maybe I shouldn’t have.

Back to Real Christians Don’t Dance. The articles are short essays and stories about issues that are important to Fischer. They bear a striking resemblance to what one finds in blog articles as one journeys around the internet today. In fact, I think that if this book were written today it would probably not be put into print by a publisher but might instead appear as blog posts.

This is the second time I have read the book from cover to cover. I doubt that I will ever completely read it again. However, it will remain close-by so that I can quickly resource it. For, buried in the text is a poem that tickles me and I enjoy sharing it with others from time to time. In fact, I would say that given the number of times I have quoted this passage, the $10.95 I spent at the Berean Bookstore back in 1989 was $10.95 very well spent.

Now Christian Two, he knew what to do,
He’d show those fundies a thing or two!
How will the world ever give Christ a try
If we don’t get in there and identify?
So “In it, and of it,” he said in his car,
As he pulled in and stopped at a popular bar.
“I’ll tell them the truth as soon as I’m able
To get myself out from under this table.”

Now along comes Christian Three jogging for Jesus,
In witnessing sweats made of four matching pieces.
His earphones are playing a hot Christian tune
About how the Lord is coming back soon.
“Not in it, but of it,” he turns down the hill
And stops in for a bite at the Agape Grill.
Like the gold on the chain of his “God Loves You” bracelet,
He can have the world without having to face it.

And Jesus turns to Gabriel, shaking His head.
“‘In it, not of it,’ wasn’t that what I said?”