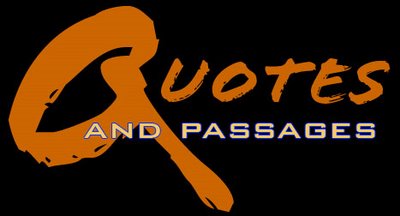 Some quotes noted during my personal reading:

— “Some say the American soldier is the same clean-cut young man who left his home; other say morale is sky-high at the front because everybody’s face is shining for the great Cause. They are wrong. The combat man isn’t the same clean-cut lad because you don’t fight a kraut by Marquis of Queensberry rules. You shoot him in the back, you blow him apart with mines, you kill or maim him the quickest and most effective way you can with the least danger to yourself. He does the same to you. He tricks you and cheats you, and if you don’t beat him at his own game you don’t live to appreciate your own nobleness. (Bill Mauldin, in Up Front. NY: Henry Holt & Co., 1945. pp. 13-14)

— ” If you can get behind an Englishman’s unholy fear of making a friend until he has known the candidate for at least five years, you will find him a pretty good egg.” (Bill Mauldin, in Up Front. p. 105)

— “The stupid speak of the past, the wise of the present, fools of the future.” (Napoleon Bonaparte)

— “Death does not concern us. For as long as we live, death is not here. And when death comes, we are no longer alive.” (Epicurus)

— “What is as wrong as the uninstructed heart?
Left to its ends, it clutches things and creatures
That can’t be held, or held, will slip their natures;
It lives to hoard or to protect a hoard.
To school! To school!”
(William Meredith from, “Fables about Error” in Effort at Speech. Evanston, IL: TriQuarterly Books, Northwestern Univ. Press, 1997)

— “We must no mock God. Yet the best of us are not so much afraid to offend Him as to offend our neighbors, kinsmen, or rulers.” (Michel Eyquem de Montaigne, in Essays. Bk. 1, Ch. 39)
.