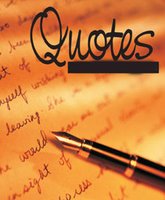 Quotes picked up from here and there:

–“I’m afraid I wouldn’t be any good at this, as I don’t watch or follow football. I always lose interest in the game after 2 or 3 innings.” (Bob Cleveland, commenting on Wes Kenney’s blog)

–“The greatest thing anyone can do for God and man is pray. It is not the only thing, but it is the chief thing. The great people of Earth are the people who pray. I do not mean those who talk about prayer; nor those who say they believe in prayer; nor yet those hwo can explain about prayer; but I mean those peope who take time to pray. (S.D. Gordon)

–“Children are the living messages we send to a time we will not see.” (John W. Whitehead)

— “I am only one, but I am one. I cannot do everything, but I can do something. What I can do, I should do and, with the help of God, I will do. (Everett Hale)

— “Marrying a woman for her beauty makes no more sense than eating a bird for its singing. But it’s a common mistake nontheless.” (Character in Cold Mountain, by Charles Frazier, page 220)

— “Ruby siad that there were many songs that you could not say anybody in particular made by himself. A song went around from fiddler to fiddler and each one added something and took something away so that in time the song became a different thing from what it had been, barely recognizable in either tune or lyric. But you could not say the song had been improved, for as was true of all human effort, there was never advancement. Everything added meant something lost, and about as often as not the thing lost was preferable to the thing gained, so that over time we’d be lucky if we just broke even. Any thought otherwise was empty pride.” (quote taken from page 301 of Cold Mountain by Charles Frazier)

— “The South is a place. East, west and north are nothing but directions.” (Unknown)

— “South Carolina is too small for a republic and too large for an insane asylum.” (James L. Petigru)

— “When I was younger I could remember anything, whether it happened or not, but I am getting old, and soon I shall remember only the latter.” (Mark Twain)

— “The past is never dead. It’s not even past.” (William Faulkner, in Requiem For a Nun)