AND, I WISH I WAS A BETTER FATHER.

Parker came in this evening and headed straight for his room. I did not realize that he was crying until Susan stopped him on the stairs and asked him about it.

He had been at a neighbor’s house playing.

I called him into my study. I call it my Ward Cleaver asylum.

As he plopped sideways into a recliner and tears began to run faster, I prompted, “Son, tell me what happened.”

“Well, how did this come about?”

“You went furious on him?”

And, that is when I made my first mistake. My feelings had been making rapid transitions. First, I had been concerned when I had heard he was crying. Then, I was angry at whomever would go after a member of my family. Then I was concerned again when I saw Parker examining his wounds. But before I could stop the emotional swings I got slapped with pride over the courage he had shown.

“That’s right! Good for you son. You went up against a ten-year old bully and didn’t give up. That took courage.”

I guess Susan thought my parenting skills non-existent and it was best for her to take over at that point.

“Parker, you should have just come home. It is best not to fight.” Susan counseled.

Well, Susan was actually right. We spent about 20 more minutes talking it all out, exploring options and such. Seeing as how we watched “The End of the Spear” last night I guess I should have been a little more spiritual in my response.

HOWEVER, I still think that it is much easier to learn to act civilized, and even easier for the Christian to learn to show God’s love for the unlovely, than it is to learn courage. I am pleased that when confronted with a bully two years older, eight inches taller, and twenty pounds heavier, Parker defended himself and “kept getting up.”

I wish I was a better father. I have trouble knowing when it is best to affirm my child’s courage, and when it is best to nourish an attitude of peacemaking. Tonight I tried to do both. I guess I won’t know if I was right until I get to Heaven. 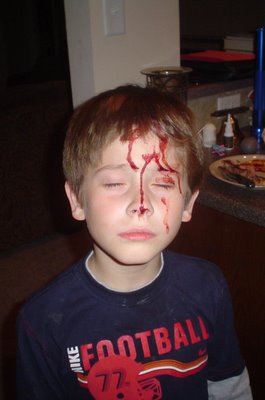